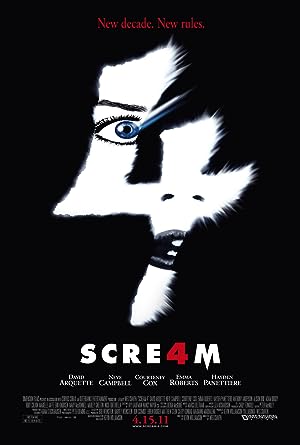 Plot: Ten years have passed, and Sidney Prescott, who has put herself back together thanks in part to her writing, is visited by the Ghostface Killer.

Welcome to the "Scream 4" Message Board - the place to discuss anything and everything about "Scream 4."

Use this board to discuss the cast and characters, the director and producers, the plot, and effects. Use our message boards to communicate with other people who share common interests. Make Actingbiz.com your "Scream 4" message board for expressing your thoughts, generating discussions, and meeting new people.

Hi my name is angel im 18 and i love movies like these, Ive been told that I should go out for acting but never really thought about it. So now im intrested in acting and i would love to try out for this for any position. Thank you

hi my name is nasir richardson. i am a 14 year old african american and i live in hamden ct. i have always dreamed of be comeing a actor . i have alot of experience. i had particapated in workshops, schools, programs and much more. i started acting when i was 10. i am very humbled and is willing to take any open job that comes to me. i was checking out this web page and i found your scream 4 movie interesting and was hopeing i can be assigned a role in it. i am will risk everything i got to get into the acting business and this movie will help me get to where i need to go.if you are interested please contactme as soon as possible.

hi, my name is marcus and i am 16. i would love a role in this movie. this by far my favorite horror movie. please email me if you need me for anything. im from battle creek michigan. thank you

i would love to play a part in this movie ive seen all the sceam movies so please give me a part. sorry for leaving this last minute.

you must get thousands of messages talking about how they don't have training but good looks or no training but some type of talent. i have gone to acting classes since i was 3, so i have talent! i know how to make the audience believe my skills, and staring in scream 4 would be astronomically great!

I would love to be in a movie! i do not have any experience, but love to learn new things! I will be 16 in May. I have blonde hair, blue eyes, and i am 5"6. Please email me

My name is Brianna Armour and im 16 years old . Im so dramatic and a team player. I really want to be an Actress . Please Email

hello my name is kimberly and i love scary movie funny movies all of those i am 14 going to be 15 on october in 2011. and i want to be a actress..

Very inters. in casting for this movie. I'm in broadcasting! So I'm excited to move forward in the movie Industry!!
please email

hi mynaem is alex. i am 5.11 in height. i weigh 128.8 pounds. i am fine with any part i am put in. i just want you guys to know that i care alot about the arts and what it takes to be a tre star well hope to hear from you.

Hello my name is anastacia rodriguez. I am 15 i am in love with these movies. I am told i am so dramatic. I am 5'6 and am accepting any position i get including a movie extra. I never knew there would be another one :)

Movies like "Scream 4" are Casting Right Now! Sign Up for Exclusive Movie and Television Auditions and Casting Calls.

Post your profile, photos, resume and videos online so you can be discovered by casting directors and talent scouts around the world. You could even appear in a big budget Hollywood movie like "Scream 4."

Hired by a Russian politician to steal the formula for cold fusion, master thief Simon Templar falls for the scientist who has unlocked the secret.

Stunt cyclist Johnny Blaze makes a bargain with the sinister Mephisto to save a loved one. Years later, Johnny gets the chance to reclaim his soul.

Nicolas Cage's hell-bound biker and this Marvel Comics adventure rode to the No. 1 spot at the box office. Source Netflix

The World Is Not Enough

Greed, revenge, world domination: It's all in a day's work for James Bond, who's on a mission to protect an oil heiress from a notorious terrorist.

Pierce Brosnan's third foray as the iconic super-agent was the highest-grossing Bond movie of its time. Source Netflix

Once a powerful lawyer, Billy McBride is now burned out and washed up, spending more time in a bar than a courtroom. When he reluctantly agrees to pursue a wrongful death lawsuit against the biggest client of the massive law firm he helped create, Billy and his ragtag team uncover a vast and deadly conspiracy, pitting them all in a life or death trial against the ultimate Goliath. Source Amazon

A con man (Giovanni Ribisi) on the run from a vicious gangster (Bryan Cranston) takes cover from his past by assuming the identity of his prison cellmate, Pete, "reuniting" with Pete's estranged family, a colorful, dysfunctional group that threatens to drag him into a world just as dangerous as the one he's trying to escape - and, just maybe, give him a taste of the loving family he's never had. Source Amazon

When CIA analyst Jack Ryan stumbles upon a suspicious series of bank transfers his search for answers pulls him from the safety of his desk job and catapults him into a deadly game of cat and mouse throughout Europe and the Middle East, with a rising terrorist figurehead preparing for a massive attack against the US and her allies. CIA analyst Jack Ryan uncovers a series of suspicious transactions that take him out from behind his desk and into the field to hunt down a powerful new threat to the world. Source Amazon