COLD CASE is a drama about Lilly Rush (Kathryn Morris), the lone female detective in the Philadelphia homicide squad who finds her niche when she's assigned to "cold cases"--crimes that have never been solved.

Previously, she used her instinctive understanding of the criminal mind on current murders. Now, she's interrogating witnesses whose lives and circumstances have since changed, making use of today's new science and finding fresh clues to solve cases that were previously unsolvable, all of which appeals to this smart, driven detective. She's also prepared for the consequences: that her work will open up old wounds and may lead suspects to commit new crimes. When she hits a dead end, Rush seeks advice from her respected mentor, Lt. John Stillman (John Finn).

Also on the team are Det. Scotty Valens (Danny Pino), Rush's confident and strong-willed partner; Det. Will Jeffries (Thom Barry), who's been around long enough to serve as Lilly's link to the past; and Det. Nick Vera (Jeremy Ratchford), a tough cop who's considered the go-to guy for getting a confession. Rush sees her assignment as a turning point in her career when she decides to make it her business to make sure that no victim is ever forgotten.

Welcome to the "Cold Case" Message Board - the place to discuss anything and everything about "Cold Case."

Feel free to discuss the show in general, the individual episodes, the cast and characters, and any other aspect of the show. Make Actingbiz.com your place for expressing your thoughts and communicating with others who share your common interests.

I love the show Cold Case.

I am a huge fan of cold case. I love everything about this show its nothing that should be change. I really would love to be on an episode. I am an actress im not an professional but i love to act I want to be on tv and on your show. I think you should make more seasons. I live in philadelphia so it wouldnt be hard for you to find me. I love this show

Post your profile, photos, resume and videos so you can be discovered by casting directors and talent scouts around the world. You might even get a chance to appear on a TV show like "Cold Case."

Secrets. Lies. Revenge. Everyone at Liberty High has something to hide... and the truth is about to come out. After a teenage girl's perplexing suicide, a classmate receives a series of tapes that unravel the mystery of her tragic choice. As the school mourns the death of Hannah Baker, her friend Clay receives a box of tapes with messages she recorded before she committed suicide.

Katherine Langford received a Golden Globe nod for her role in this series based on Jay Asher's best-selling novel. Source Netflix

When the black sheep son of a respected family threatens to expose dark secrets from their past, sibling loyalties are put to the test. When black sheep oldest son Danny comes home, the Rayburn family must confront the darkest limits of sibling and parental loyalty. Trouble starts when oldest son Danny Rayburn comes home for the 45th anniversary celebration of his parents' hotel in the Florida Keys' Islamorada. 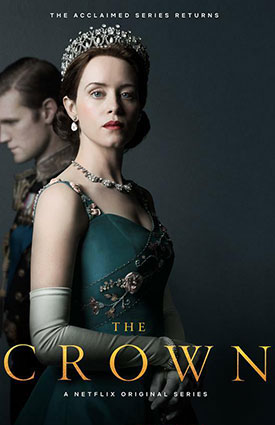 This drama follows the political rivalries and romance of Queen Elizabeth II's reign and the events that shaped the second half of the 20th century. As a young Elizabeth becomes Queen, she must manage major political issues and personal matters, which often clash in ways she never imagined. A young Princess Elizabeth marries Prince Philip. As King George VI’s health worsens, Winston Churchill is elected prime minister for the second time.

Indiana Jones and the Temple of Doom

Indiana Jones, his young sidekick and a spoiled songbird get more than they bargained for when they go to India in search of a missing magical stone.

This sequel took home an Oscar for its eye-popping array of special effects, from monkey brains to molten lava. Source Netflix

All grown up in post-apocalyptic 2018, John Connor must lead the resistance of humans against increasingly dominating militaristic robots.

Based on the H.G. Wells classic, this adventure follows Alexander Hartdegen, a scientist and inventor, who's determined to prove time travel is possible. Testing his theories with a time machine of his own invention, Hartdegen is hurtled 800,000 years into the future, where he discovers that mankind has become divided into the hunter and the hunted. Source Netflix